Jana Zitová and photographer Vladimír Vološin are a couple who has been operating their unconventional artistic farm for twelve years in Drienovec near Košice.

They help Roma with their integration into society, they operate museum of pencils, a small museum of cameras, a Roma gallery and last but not least, local school children come to their centre for fine arts classes.

Roma represent little less than one half of Drienovec population, while part of them live inside the village and problematic community lives in the settlement on the outskirts.

It was about two years ago when the village with almost 2 thous. inhabitants gained popularity thanks to police raid.

Two men were arrested in Drienovec for allegedly attacking police with axes; the courts did not believe it.

In the near Moldava nad Bodvou, another police intervention stirred public interest and General Prosecution has been dealing with the case to date.

„It is hard to find another crazy space like this,“ muses Jana Zitová about her home and adds: „We have elaborated a system where you open the gate and you end up in a different world.“

„We have sought a house outside the town where we could be as creative as we wish and we found sufficient size in Drienovec,“ Mr. Vološin talks about his reminiscence from moving into the village twelve years ago. 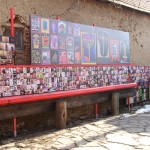 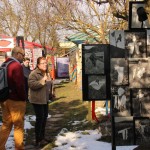 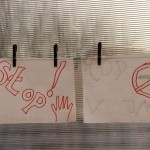 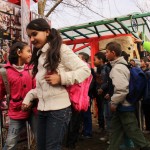 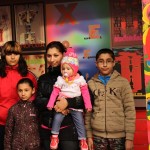 Charismatic pair is paradoxically getting along with Roma better than with non-Roma locals. They caused havoc some years ago when they installed a a blackboard with and a chalk in the village centre.

Roma started gathering by it and having fun, while others started to complain.

Finally, they brought the board back to their yard, where it serves to children who wish to draw something as they leave.

„One moment, please,“ a small Roma boy in glasses shouts at her mum near the blackboard; as he draws a sports car with a white chalk, he poses for photography and then runs after his family to the street.

When Roma parents saw that their children can freely draw in the yard, they started to help out with maintenance of this unusual farm on their own accord.

„We used to have one guy, who would come at eight in the morning asking what he could do,“ says Vološin and refuses to admit that Roma are not willing to work; activation works helped a lot, too.

Roma from abovementioned Budulovská settlement in Moldava nad Bodvou come to work here in order to receive their benefits in material distress, too.

However, this family is not always involved in friendly and humorous situations, for some poor families, their arts comes often as a softener to tough reality of living in poverty.

Vološin describes a story of one Roma boy who sleeps on a straw and comes to their house to have something to eat. His father hanged himself and mother is an alcoholic.

From the start, some things disappeared, but they learned to deal with it via joint consent.

„Once my camera vanished, so I went to the settlement and some hours later, some Roma came to return it themselves.“

They had a similar experience when their son with family came to visit.

„They parked their car near the school and later they found a broken glass and missing child seat,“ a photographer remembers. Once again, Roma knocked on their door at night and came with the missing child seat. They found it in Moldava.

A fifty-year old woman named Ivana has been visiting the farm for nine years. Zitková is happy that Roma like the Artfarm; Ivana’s three daughters often visit together with their small children.

„We got used to it, it is better than sitting at home or going to the settlement,“ says Ivana with ashamed voice.

Slovak language causes much trouble to local children. Many of them speak either Hungarian or Roma language.

Thus, in the courtyard, there are short descriptions of individual artistic fields and profiles of artists in Slovak language. This way, children learn the language playfully and teachers from local school come to visit their fine arts classes with pupils.