“I would like to work with children, it is fun and better than other jobs,” says an excited young teenager Štefan from Roškovce near the town of Levoča. He speaks slowly and quietly, as if he was ashamed of his roots.

Roškovce is a Roma settlement near the village of Doľany with more than four hundred inhabitants, 70% of whom are Roma.

Most of Roma inhabitants live on a hill above the village in conditions similar to those in third world countries. In the past, people belonging to the majority also used to live in Roškovce, however, the last woman left nine years ago. Since then, the village has been decaying and Doľany has gradually been segregating into two parts – Roma and non-Roma.

Štefan used to belong to the first group. As a child, he was automatically enrolled to a special school. After finishing primary school, he chose the vocational school in Levoča to become an upholsterer. A year later, he dropped out and spent several months at home.

“I didn’t like it,” admits the young man bashfully. He would like to return to school, but there are not many options. Having completed special school, Štefan could apply only for two vocational programs in the Spiš region: upholstering or commercial operation in services and housework.

The young man was lucky. In March, he was hired by a local company in Spišský Hrhov, three kilometers away from Roškovce.

“I asked if they had any vacancies and they gave me a chance. At the beginning, I start as a helper doing small digging and mason work, ” says Štefan. In his free time, he volunteers in the local community center, opened in December by a non-governmental organization Člověk v Tísni Slovensko. This organization has received several prestigious awards for activities with segregated Roma citizens. It has been active in the village since 2006.

Different than the others

At first sight, the community center in Roškovce does not seem to fit in. It is a modern and inspiring place designed by architects cooperating with Člověk v Tísni Slovensko.

The building was constructed in three months on the grounds of a local primary school by ten local Roma inhabitants. Apart from the construction itself, volunteers helped to build the furniture, too. The center was opened last December, until then, they used to go to classrooms after the classes were over. 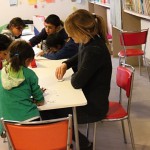 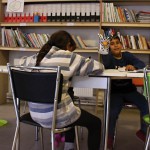 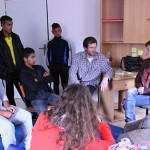 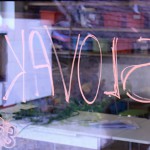 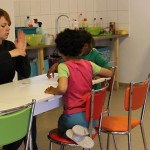 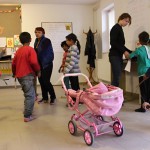 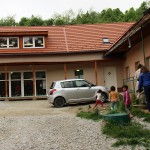 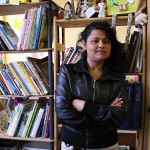 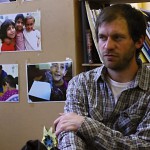 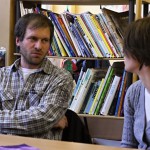 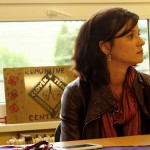 Cleaning is provided by means of activation works. Unemployment is one of the thorniest issues of the village, the second being education, as many children were enrolled to special schools or special classes.

“We struggle with the problem of enrolling children to special schools every year. That is why we started to cooperate with Spišský Hrhov, as they have their own non-state diagnostic center,” says Petra Sláviková from Člověk v Tísni Slovensko, where the vicious circle of poor segregated Romani families usually starts.

The Ombudsman’s Office estimates that eleven per cent of the twenty-four thousand pupils diagnosed with variant A, i.e. mild handicap, were wrongly moved to special classes. Most of them come from marginalized Roma communities. During the former director’s term in office, children were recruited to special schools in the settlement, says Sláviková. Two years ago, the new management of the school brought a change for the better.

Člověk v Tísni Slovensko currently runs two community centers in the village. One of them is focused on adults, the more recent one is available for children after school or during holidays. “They are in a relaxed regime, they have more space for creativity,” says Sláviková.

Children are divided into several groups according to their age. The NGO is satisfied with the cooperation with the school. “Children don’t have to go home from school with books, they have them at disposal in the community center and they take tutoring classes here, ” she explains.

Štefan was one of the young Romani boys who volunteered to join. The community center is gradually becoming his second home. He was helping with its construction, he looks after children and actively participates in workshops organized by the non-profit organization.

The Open Society Foundation also contributed to the activities of the center. Two projects – Who is Behind the Door and Report from Behind the Village – were supported following the call for proposals of the NGO Fund. Both projects are focused on the reinforcement of active citizenship and destroying barriers in society. They are financially supported by the Democracy and Human Rights grant program and they are realized in Spišské Podhradie, too.

“We organized antidiscrimination trainings, a meeting of young people with a trainer leading the whole seminar, ” says Petra Sláviková, coordinator of community centers in Roškovce and Spišské Podhradie.

The trainings were designed as an active experience. Children are supposed to create their own newspapers and comics focusing on what they have learnt and on the most common social barriers they see.